Or, a genuine game blog post (but not really)

What surprised us the most?
Grapefruit beer

What surprised us the least?
Three kinds of sauce with some fries

What is our fondest memory?
The monstrous exodus fifteen minutes after the big Blizzard announcement

What is our biggest regret?
Never knowing what the announcement was about j/k we don’t fucking care

What would we like to see next year?
An AXE stand

Our story begins at a two hour drive from Cologne, where ikdenal and yours truly are ravaging TheGiantMidget‘s fridge in search of provisions for what we thought would be a very expensive day out.

We were not mistaken.

But after said two hour drive and another 15 minutes in a shuttle bus jam-packed with the palest, unhealthiest-looking people I’ve ever seen, we needed the air and the alcohol. Lucky for us, there were several open air trucks that catered to our every need.

People were gushing all over it.

Anyway, after we felt reinvigorated it was high time to check out the insides of Gamescom, and especially the coolest, raddest game on display…

Being no huge fan of fans, we only stood our ground at venues with nary a queue, or cheated our way to a select number of games.

We also got to try Double Kick Heroes, a game I wrote briefly about, but we made the mistake of (unknowingly) playing on advanced mode, and we failed. A lot. And very miserably. There was a lot of shouting. It was not pretty.

By far the coolest cabinets though.

We did come to Gamescom with a clear mission, and while TheGiantMidget was able to try out the new DayZ closed beta for 15 minutes, we could only weep at the never-decreasing amount of people at the Monster Hunter World venue. Here’s a picture of our sentiment.

Of course, these were not the only games that would stay beyond our impatient reach. Here’s a small selection for which our hearts ached.

Other games we would steer very clear of, mainly because of the loud shrieking, the pungent smell, or the insane amount of people mashed together. For some reason the huge Blizzard venues were a fine mixture of all this.

The VR sections were representing like mad, with loads of people trying Fallout 4 VR or whatever they could get their hands and eyes on.

All we could do was stare.

The retro hall offered some sweet relief from all this human excess. Kids and their parents had a chance to try out the new and old, with smiles on their faces.

A sight for sore eyes.
And ears.
And nose.
And skin.
I think I got some of it in my mouth.

And you know it’s been a hard day when you’re trying to see a fully rendered CGI promo about a sexist browser game you care nothing about, and wobbling girls with giant wings are constantly blocking your view. 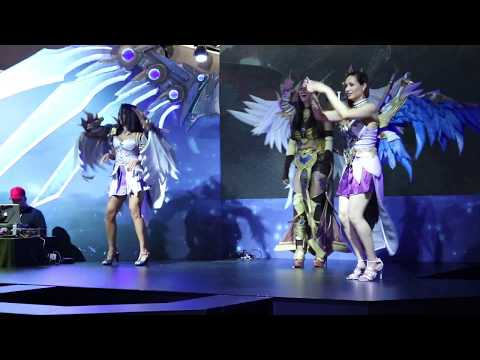 That was as much as we could take, only to find out the day after that extra halls were being opened to the public, with more publishers and developers joining the fray. We were missing out on a lot…

So going to Gamescom is kind of like having to buy a season pass for an early access game, with lots of bugs and loading times, but you really really really need the whole package and this assault on your senses for multiple days in a row in order to have the full experience first and firsthand.

To wrap things up, these are the games and gears we laid one or more eyes on (sometimes even hands), and where to find them.

Did you know that, when neglecting your mind, body and soul for ten hours straight, you could theoretically squeeze in a few minutes of gameplay from 12 to 20 games in 4 days time? The more you know.

← It’s that time of the year again
Oh Squaresoft, what have you become … →