Me:        WHAT?! Everyone has probably made up their mind about the game anyway; it goes from over-the-top sexual innuendo to blatant fan service (dare I say, sexism), it’s got boobs and crotches all over the place, surely no one really cares about the actual game experience by now?

Me:      Yes I know the male proportions are out of bound as well, I’ve done my homework on the whole controversy. That’s not the point. This game has baggage, it’s reviled, it’s…

Me:        God, OKAY! I ADMIT! I love Dragon’s Crown to bits! In fact, every Vanillaware title has a special place in my heart, but… it’s like the art director, George Kamitani, just lost all self-control on this one. I can’t take the rolling eyes anymore when introducing this game to friends. I mean, I love boobs as much as any other…

The game is awesome in so many aspects. If you are willing to turn a blind eye for it’s one glaring ‘fault’, you can enjoy all the good things it has to offer: 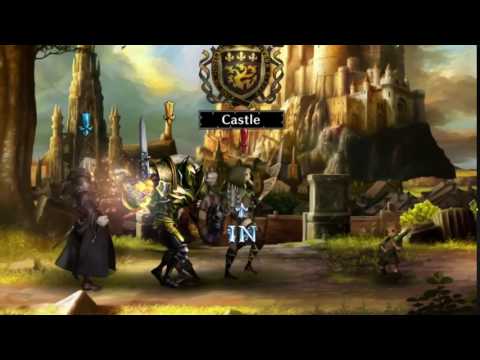 Wonderful backgrounds and animations, with eye candy that’s on par with the previous console instalments.
You could say Vanillaware revitalizes 2D gaming, and is an inspiration for many others to stay the course.

…showing off yet another succulent display of foodstuff.
Monster guts never looked so appetising.

…with different voice-overs for decent variety.
Character voice-overs are both in Japanese and English, for all you dub-extremists.

…brings the whole to another level.
Is there such a thing as Smooth Fantasy?

…each with wildly varying skills.
Focus on self-preservation or crowd-control?
Assist your fellow adventurer or become a lone powerhouse?
Anything goes.

…couched or webbed.
Seamless drop in / drop out, anywhere, anytime.
Vita cross-play.
Add some mead and a roast hog and you can ritually burn all your Mario Party copies.

Bit of a misanthropist?

Don’t fret.
The game provides increasingly powerful AI-buddies which you can even use to boost low-level characters.
Play with yourself to your heart’s content.

…is where predecessors Princess Crown, GrimGrimoire, Odin Sphere and Muramasa REALLY shine, and where Grand Knights History falls a bit flat, but only in comparison.
Dragon’s Crown follows the latter, as a cross between a very lengthy tutorial and an animated table-top session of D&D.

For better or for worse, they’re in it, and they’re here to stay.

Still, they do a much better job at being part of the fantasy slash anime setting than the ones in, let’s say, Queen’s Blade (watch out, ridiculously NSFW), despite not serving a higher, more functional purpose as argued in Kill la Kill.
If you’re totally into this thing, the Oneechanbara and Senran Kagura hack ‘n slash games will totally tickle your fancy, among things to tickle, though I personally find them lacking in many respects, except for this one thing that I can’t quite put my finger on.

The winner for most practical outfit goes to Code of Princess though, which is a rather okay Guardian Heroes successor. I suggest playing it on the 3DS if possible, if you’re not taken with high-res pixel boobs.

Protecting all your vital parts.

3D is not always the answer.

This should come as no surprise, as George Kamitani previously worked on another famous beat-and-magic’em-up, Dungeons and Dragons – Tower of Doom, and with this game as a basis he had Dragon’s Crown’s idea pitched for years.
I’m happy he pulled through in the end.

But the more games Vanillaware releases, the more it becomes obvious Kamitani is given free rein to let his New Year’s spirit seep through.
Make of that what you will.

Your mother is standing right behind you.

Despite taking more liberties art-wise, the Vanillaware games are all excellent one way or another, and should be added to your game bucket list if they aren’t already.

Don’t wait too long; the next one is already on the horizon.

And it looks magnificent.

For all the pleasure I had playing through this enchanted painting, alone or with friends, it easily merits more than

Dragon’s Crown was released in July, 2013 and is playable on PS3 and PSVita